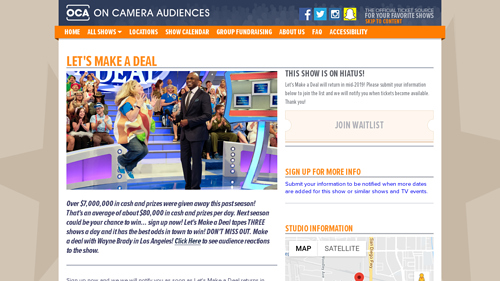 You can get free tickets for a live taping of Let's Make a Deal!

The show involves selected members of the studio audience, referred to as "traders," making deals with the host. In most cases, a trader will be offered something of value and given a choice of whether to keep it or trade it for a different item.

The program's defining characteristic is that the other item is hidden from the trader until that choice is made. The trader thus does not know if he or she is getting something of greater or lesser value than the first, or a prize that is referred to as a "zonk," an item purposely chosen to be of little or no value to the trader.

If you would like to attend another taping, you are allowed to join the waiting line after the show is over.