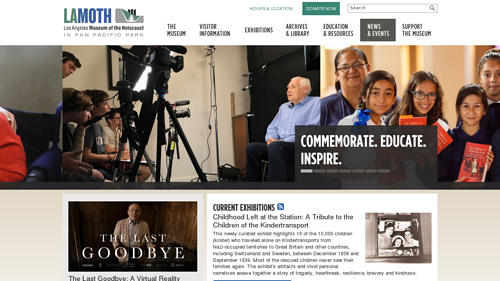 Los Angeles Museum of the Holocaust (LAMOTH) is the oldest Survivor-founded Holocaust museum in the United States. In 1961 at Hollywood High School, a group of Survivors taking English as a Second Language classes found one another and discovered that each of them had a photograph, concentration camp uniform, or other precious object from the Holocaust era.

They decided that these artifacts needed a permanent home where they could be displayed safely and in perpetuity, and created LAMOTH. Some of these founding Survivors remain active on the LAMOTH Board of Directors today.

Los Angeles Museum of the Holocaust presents the history of the Holocaust as objectively as possible. For this reason, the exhibits present many original artifacts, displayed in a way that allows them to tell the individual stories they contain.

Los Angeles Museum of The Holocaust boasts the west coast's largest archive of documents, relics and other primary source materials from the Holocaust period (1933-1945).

Admission is always free.
The below video is pulled from Youtube automagically. Please report if it's wrong or inappropriate.